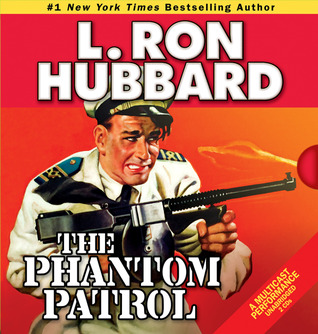 I lucked out and found The Phantom Patrol audiobook at Goodwill this afternoon - and it was unopened! It clocks in at about two hours, so I gave it a listen while I was tidying up around the house. It follows Coast Guard CPO Johnny Trescott as he receives a distress call from a plane that has crashed and is sinking. He was initially chasing some drug runners on the ocean, but he cuts that short in order to help the passengers on the plane. Turns out that the drug runners heard the same alarm, and Johnny and his crew get something far more than they bargained for when they arrive at the scene.

This novella is fast-paced and action-packed - Hubbard is very good at getting your pulse racing, that's for sure! The only things that makes me want to rank it 3 stars is because the characterizations are on the light side, and it's kind of predictable. There is one pretty good twist nearer the end, though, that would have been unconventional when the story was new back in 1935.

My favorite aspect of the audiobook is the production itself! It's a multicast performance with music and sound effects. The featured performer is Phil Proctor, aka Howard from Rugrats.

Overall, The Phantom Patrol is fast and a lot of fun - exactly what a pulp should be! You know it's a good production when your cat thinks you're being shot at by pirates!


I listened to this audiobook on January 12, 2005 and my review is also on Goodreads.