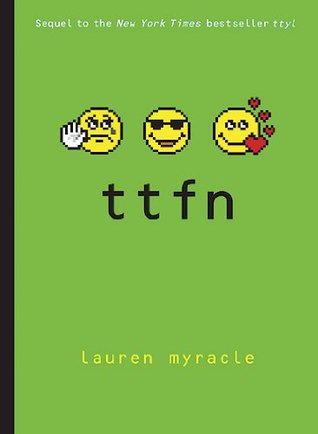 Just as ttyl, ttfn is told completely in IM format making it something like a modern epistolary novel, I suppose. The language feels very authentic to the characters and target audience (especially if this were 2006). The characters do face real issues, but here they tend to come off as cliché. The characters are pretty obnoxious and annoying, but at the same time, they still seem like real high school girls (I swear, I knew people just like them). Although the format is refreshing - and a little jarring at first - and the story goes very quickly, it is a bit dated now. It makes me feel old and I would have been high school junior when this was originally released. There are of references to A Cinderella Story with Hilary Duff and Chad Michael Murray, a movie I've never seen. There is a lot of crushing on Mr. Murray's character...I remember when he was quite popular back in those days and you couldn't even look at a magazine without seeing his face plastered all over the cover. I'm pretty sure I've only ever seen him in Freaky Friday as Jake and most recently in Agent Carter as Agent Jack Thompson (great show, but his character is a jerk).

Anyways, before I get too off-track, I would recommend reading this sequel if you really enjoyed the first book in this series. Otherwise, it just seems like more of the same old thing.