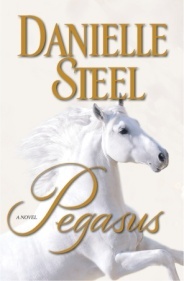 Nick and Alex are titled members of the German aristocracy and have been best friends since childhood as they have grown into men with families of their own. They are accustomed to lives of luxury on their Bavarian estates. Everything Nick knows changes after the Nuremberg Laws are passed and as Hitler's ideals take greater sway over the German people. A secret that his father has kept from him his entire life forces him to take his sons and flee to America to save themselves from labor camps. To get there, he takes a job with the Ringling Brothers Barnum and Bailey Circus based in Sarasota, Florida with a horse act. Alex generously allows Nick to take some of his famous Lipizzaner and Arabian horses and teaches him the basics of training them for show. Eventually, under the name Nick Bing, Nick and his star Lipizzaner, Pegasus, become a star attraction at the circus. Nick also finds love with a tight-rope walker named Christianna who is half his age.

Pegasus is the second novel I've read by Danielle Steel. I wasn't planning on reading another, but a book club I'm in is reading the novel, so, of course, I had to check it out. Honestly, I preferred Echoes, the first book I read. Her newest novel just feels too over-arching and I would have liked to read a more focused story on Nick himself during wartime (at least once he gets to America, that is). If the story were more focused, I believe it could also be much more interesting as a whole. I didn't actually begin to get interested in the story until about twenty pages in when Nick learns the truth about his mother. I would have actually liked to get a full book on that - that could have been a very interesting Downton Abbey-esque story of scandal and coercion. I would have liked to see a more detailed account of the circus, as well.

As for the characters of Nick and Christianna and the rest of the cast, they're alright (if a bit one-dimensional), but none of really stood out to me. I just wasn't invested in them. The romance between Nick and Christianna was sweet, but it seems like every ten seconds he's telling her what she can and cannot do in regards to her act, and that got old fast. And, the 22 year age gap is just a little too much for me, especially when Nick has children just slightly younger than his love interest. The ending of the novel is rushed to tie things up too neatly by condensing approximately sixty years of family history in the final chapter or so.

Overall, I found Pegasus to be boring and predictable, suffering from far to much telling rather than showing. But, hey, it does have a beautiful horse on the cover! If Pegasus were a shorter, more tightly woven, character-driven novel that could show me the struggles the characters face and actually make me care, then I probably would have rated it much higher. Even a book that focused on the history (fictional or real) of Ringling Brothers Barnum and Bailey Circus would have received a better rating. If you generally enjoy the formula that has made Danielle Steel famous, Water for Elephants by Sara Gruen, or like horses, you may also like Pegasus. My suggestion: Skip Pegasus altogether and read Water For Elephants instead, or even watch the movie because it's actually pretty good.

Note: Is it just me or did anyone else think of Shadowfax, the lord of all horses, when they saw the cover for the first time?