Georgie McCool's (and yes, that is her real name) marriage has been troubled for quite awhile now. Both she and her husband, Neal, still love each other deeply, but that's beside the point. Just before they're due to leave L.A. to visit Neal's family in Omaha, Georgie realizes she can't go. Georgie is a tv writer and learns at the last minute that she'll have to work over Christmas. She expects Neal and their daughters to be upset, but she doesn't expect him and the girls to go to Omaha without her. Now she wonders if she's really done it, if the marriage is over. Georgie tries to call Neal's cell, but he's not answering. Later, when Georgie visits her family in L.A., she uses her old yellow landline to call Neal's parents' home phone in hopes someone will pick up. She is able to get a hold of Neal, but something's different about him. He's not her Neal, not yet. She's realizes she's talking to a past version of Neal, from an incredibly important time of their relationship. Time travel, magic phone? Georgie's not sure, but she has a feeling she has as an opportunity to fix their marriage before it even begins. But, what if that means Georgie and Neal would have been better off if they never married?

This is the second book by Rainbow Rowell I've read, but I can honestly say I love her writing style. Landline focuses on both Neal and Georgie's relationship in the present, flashbacks to early on in their relationship as they are beginning to get to know each other, plus the crossroads each is at on that landline phone. I really enjoyed the glimpses we are allowed of the characters from the beginning of their relationship while they were in college to their present day married life with children. The characters are all well-drawn and are quite realistic. That said there were a few times I found myself wanting to slap or shake them to get them to see sense, but, you know, that's sometimes how life is in the real world.

Even though this book isn't exactly action-packed, it is quite compelling and well-paced to keep me turning the pages. The mysterious phone at the center of the story is an interesting part of the plot. If this were a sci-fi or fantasy book, I would probably want to know more about the phone and how it works, but here I like that that aspect is kept to a minimum in this novel as it works to the story's advantage. Another aspect, I also particularly enjoyed is Rowell's sense of humor,and all of the geeky references. Like with Fangirl, I would like to friends with some of her characters.

(view spoiler)[Cath and Levi's (hide spoiler)] cameo made my day!

Did anyone else have the Twilight Zone episode called "Long Distance Call" in the back of their mind while reading Landline, or was that just me? 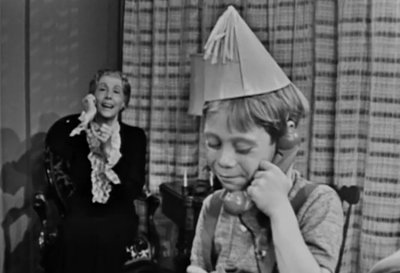 “The future was going to happen, even if he wasn’t ready for it. Even if he was never ready for it. At least he could make sure he was with the right person. Wasn’t that the point of life? To find someone to share it with? And if you got that part right, how far wrong could you go? If you were standing next to the person you loved more than everything else, wasn’t everything else just scenery?”

“I love you more than I hate everything else.”