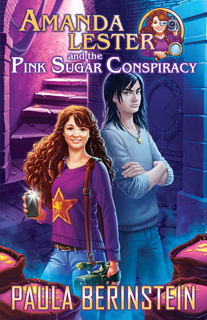 I received a free copy of this ebook in exchange for an honest review.

Don't think that just because Amanda Lester is descended from Inspector G. Lestrade that she's interested in going into the family business. She wants to be a filmmaker, not a detective, although admittedly her film club isn't really coming together since her control freak tendencies are driving members away. Amanda's life changes dramatically don't give her any choice and suddenly enroll her in a boarding school for the descendants of well-known detectives - and it's halfway around the world in the United Kingdom. She resists as much as she can when she gets there, but once she and her new friends notice blood droplets and a strange pink substance in weird places she realizes she has to know what's really happening. Is it part of a real mystery or part of an elaborate class project the teachers assign each year? When Amanda's father goes missing and the school cook is found dead with her head stuffed in a bag of sugar, the kids realize that they are right in the middle of a very real mystery. Amanda realizes she's going to have to embrace her family name and discover the truth. Here's the thing, it looks as if Blixus Moriarty is involved, a descendant of Professor James Moriarty, the arch-nemesis of Sherlock Holmes, and he doesn't like kids interfering in his criminal enterprises.

Amanda Lester and the Pink Sugar Conspiracy by Paula Berinstein is easily a new favorite middle grade novel featuring a fantastic mystery for any fan of the genre. I was absolutely hooked by the premise of the story and shortly after I began I realized I couldn't put it down. I would love to study at the school Amanda attends, which in it's own way reminds me of Hogwarts from J.K. Rowling's Harry Potter series in that it's a secret boarding school in the U.K. that teaches very specialized classes. In this case, it focuses on detective work, rather than witchcraft and wizardry. Who wouldn't want to go to a school for the descendants of some of history's greatest detectives, right?

Well, Amanda wouldn't, for one. She has no plans to follow in the footsteps of G. Lestrade - the bumbling Scotland Yard Inspector who sometimes worked with the brilliant Sherlock Holmes - and I don't blame her for not wanting his name hanging over her head for the rest of her career. However, once she begins to get into the swing of things at the school and make some friends, she begins to realize that detective work isn't all that different from film making. Amanda is a great leading character - she's independent, driven, smart, and very capable. That said, she isn't without flaws, for example, she's a bit of a control freak and she can sometimes jump into things without thinking them through. However, she is able to recognize her flaws and try to do better, and it was a pleasure watching her character grow over the course of the story.

The rest of the cast of characters, including Ivy, Nigel, Amphora, Simon, and Nick, plus school professors, are all as well-written as Amanda. While I enjoyed getting to know her friends, but I believe Ivy was my favorite of the group, as she manages to steal all of her scenes. I loved the fact that she doesn't let her disability, blindness, dictate what she can and can't do - and Nigel is just the best guide dog there is. Nick is also an intriguing character, and I loved seeing what he becomes. There's also the barest hint of a possible romance between him and Amanda, but the story doesn't focus on it. They're all too busy trying to work out the developing mystery to have the time to think about that sort of thing.

Now, the mystery is top-notch and I enjoyed working it out with Amanda and the rest. I won't say much more about it to avoid spoilers, but I was certainly hooked when it came to figuring out the meaning of the title and the bigger picture for the story. This book also has some great twists and turns, some of which I had predicted, but the execution is very well done. I liked discovering the truth alongside Amanda.

By the way, I was totally picturing Blixus Moriarty like this: