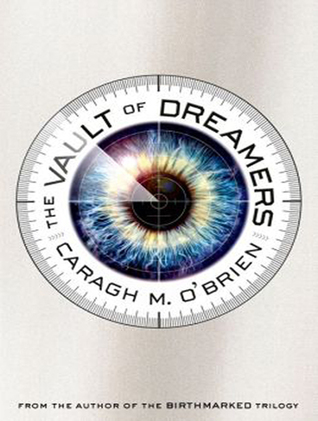 The Forge School is one of the most prestigious art schools in the country and The Forge Show is one of the most popular reality television programs, as well. The reason is because the students lives lives are broadcast live to the viewing public, and their popularity rankings determine their time at the school. The students even have a mandatory twelve hour sleep cycle to help boost their creativity. When Rosie, a first-year, decides to skip her sleeping pill one evening, she realizes that there is something off about the school as she begins to suspect that something nefarious is going on beyond the ever-present cameras' reach. The more she tries to look into it, the more she begins to notice that something isn't quite right at the edges of her own mind.

I've heard so many great things about Caragh M. O'Brien that I thought it was time to try her work, and I was quite pleased to see that The Vault of Dreamers, the first volume in her new series, was available on audio. A great way to describe this story is as a 1984-esque dystopian set in the world of a reality show, and it works really well. The beginning of the story certainly hooked me and I was invested in following Rosie's school career and her struggle to find out what's going what's going on at The Forge School. The only aspects that I didn't care for was the (somewhat) love triangle, the fact that Rosie seemed to make a few progressively dumb decisions, and that massive cliffhanger ending. I'm going to have to read the sequel, The Rule of Mirrors.