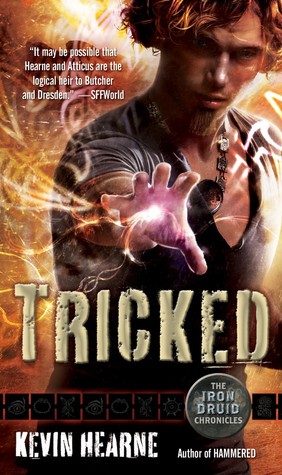 Navajo trickster god, Coyote, gives Atticus a hand when some bloodthirsty thunder gods come looking for vengeance after Thor's death. And, by gives him a hand, he becomes Atticus's body double and lets the assorted thunder gods think they've chopped Atticus into itty-bitty pieces. Soon enough the real Atticus finds himself wrangled by Coyote into fighting brutal skinwalkers. Just as Atticus thinks he's starting to get a handle on things again, betrayal comes from an unexpected direction. Atticus won't be fooled again, if he survives this time that is.

I'm so excited to be back to the awesome The Iron Druid Chronicles! I have so much love for this series. This time around the experience was a bit different, but still just as great. This time I read the paperback copy rather than listen to the excellent audiobook narration provided by Luke Daniels. Honestly, while reading I had his voice in the back of my mind the entire time, and just how he sounded in general in mind. Some of my pronunciation of the Irish (and Navajo) words were probably quite off, because I either couldn't remember how it sounded or because it was one I had never heard said aloud before. Regardless, I had a great time getting to know some of my favorite characters again. On that note, as much as I like Atticus, Granuaile (I love her relationship with her sensei), and Oberon (a close second favorite, here), I think Coyote easily manages to steal all of his scenes. He really manages to shake things up, and it was good to see Atticus face something he's not all that familiar with from the start.

Overall, The Iron Druid Chronicles by Kevin Hearne just keeps getting better and better! I could go on and on about this book, but I'll just save time and tell you to pick up this book (or start this series from the beginning), especially if you're a fan of urban fantasy in the vein of The Dresden Files by Jim Butcher or the television series Supernatural. I can't wait to dig into book five, Trapped!