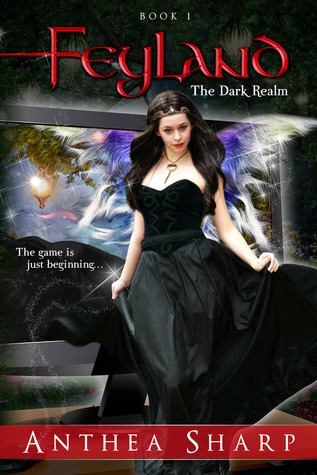 Feyland is the most immersive virtual reality sim game ever developed and Jennet is the first person to play the prototype since her father works for the company behind it. She had no reason to suspect that the game is real, that the Unseelie Fey are trying to come through into the modern world using VR gaming, but soon enough she's battling the Dark Queen for her very life. In order to get back into the game after being banished with her health slowly declining in the real world, she needs to find a suitable champion to fight in her name to help her defeat the Queen once and for all and reclaim what has been stolen. That's where Tam Linn comes in, he's a fellow classmate at Jennet's new school and he's easily one of the best gamers she's ever met. He could make the perfect hero in the game, but his real-life situation is far from ideal. When he finally agrees to check out Feyland with Jennet, he's blown away by everything the game has to offer. What he doesn't yet realize is that this "game" can have deadly consequences, and that the fey are ready to make their move.

I've had The Dark Realm on my tbr for ages since it sounded so intriguing; however, a friend of mine really made me decide to give it a shot. She stumbled upon it a couple of weeks ago as a Nook freebie and read through it in a day, plus she had nothing but good things to say about it. Luckily, it was free on Kindle as well so I downloaded it and eagerly dug in. Usually, freebie's can be hit or miss, but this one's most definitely a hit. It's well worth the read just to see how the author combines virtual reality gaming and The Ballad of Tam Lin. The two leads, Jennet and Tam, are well-written characters, both of which are relatable for a variety reasons. I liked seeing them open up to one another through the game and become friends when they wouldn't have ordinarily. Marny, Tam's school friend, is my favorite side character - she's a breath of fresh air. I can also say that I would have liked to have seen more of Thomas, the game's creator. The world-building is also excellent, as the author ably creates two very distinct worlds - "the real world" and "Feyland" - with quite visual prose. By the way, the story also goes a little bit meta in a fascinating way.

Overall, The Dark Realm, the first book in Anthea Sharp's Feyland trilogy is a new favorite. If you're looking for an imaginative and slightly futuristic twist to fairy tales, you will enjoy this story. I need book two, The Bright Court, right now!