The Friday 56 (With Book Beginnings): The Sword of Summer (Magnus Chase and the Gods of Asgard #1) by Rick Riordan + 50/50 Friday

This week I'm spotlighting a book I'm just about to start, The Sword of Summer (Magnus Chase and the Gods of Asgard #1) by Rick Riordan.  I'm really excited to start in on this novel - Rick Riordan's take on Norse mythology!

Yeah, I know.  You guys are going to read about how I died in agony, and you're going to be like, "Wow!  That sounds cool, Magnus!  Can I die in agony too?"

"Um..." I reached for my shoulder strap.  My backpack had apparently not been resurrected with me.  "No."

Hunding grunted.  "No one brings luggage anymore.  Don't they put anything on your funeral pyre?"

This week I'm also taking part in a brand new linkup called 50/50 Friday, which is hosted by Carrie @ The Butterfly Reader and Laura @ Blue Eye Books.  Every week they'll have a new topic featuring two sides of the same coin - this week the topic is a sidekick who deserves a spinoff/ a sidekick who is better as a part of a group. 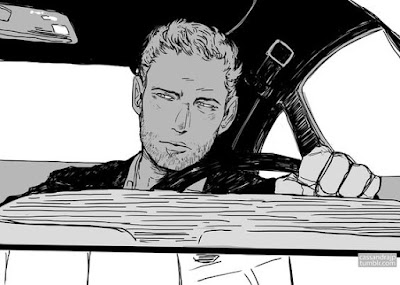 Mr. Gray aka The Grey Man aka Dean Allen from The Raven Cycle by Maggie Stiefvater - I would have said Ronan Lynch, but it sounds like he will be getting a companion trilogy!! Otherwise, I would love to see the Grey Man before (and after) this series takes place. 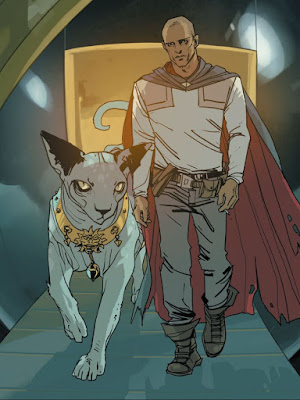 Better as a Part of a Group:

Lying Cat (and/ or The Will) from Saga by Brian K. Vaughan and Fiona Watt - I can't imagine these two apart - they make such a good team! However, I wouldn't say no to a spinoff featuring both of these characters.