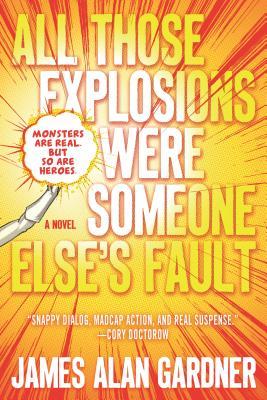 Both monsters and superheroes are real. Sparks are the superheroes (the term superhero has already been trademarked) with costumes and awesome super-powers that don't really make a whole lot of sense if you think too hard about them, and they fight for truth and justice - mostly. Darklings are creatures of magic and they warp reality with their presence - doors creak and cobwebs gather. They are creatures you might know as vampires, demons, weres, ghosts, and more. Kim Lam was a regular college student until a freak accident turned her and three friends into Sparks - forcing them into the unending battle between the Light and the Dark - but first they're going to have to master their new powers and come up with cool hero names and costumes. Turns out, though, that the "accident" was the first act in a Mad Genius's latest scheme and now these four newbie superheroes have to save the day - and they haven't even picked their team name yet.

As soon as I heard about this new release from James Alan Gardner, I knew I had to try it - I mean, superheroes and monsters? Yes, please! I have never read a book with a combination quite like this before, but it sounded perfect since I love superhero movies and can't get enough urban fantasy. Luckily, All Those Explosions Were Someone Else's Fault lived up to most of my expectations. I loved watching Kim and her friends figure out their newfound powers and all the bells and whistles. It's so much fun exploring a world in which both superheroes (or should I say Sparks) and monsters exist together. The world-building in this is outstanding and we're thrown right into the mix. The science (80%) and magic (20%) system that controls the world and defines powers and abilities for both Light and Dark creatures. Even though we're dealing with so many sci-fi and fantasy elements mixed together, the story never gets too silly or inconsistent. My favorite part is actually the relatability of Kim, our Spark narrator. Kim is an Asian-Canadian gender-fluid person who is still in the process of self-discovery and reinvention (she mostly uses she/ her pronouns). Her voice is incredibly refreshing and admirable - plus, just the right amount of nerdy. Kim might just be one of my new favorite characters of the year, by the way.

Overall, if you're looking for a sci-fi urban fantasy novel with monsters and superheroes that packs quite a punch and fits in so much in just under four hundred pages. Plus, the formatting is unique and is reminiscent of comic book pages, making you speed through the story that much quicker. If you're a fan of fast-paced adventure, the Marvel Cinematic Universe (this novel is incredibly visual), a strong cast of characters, and can't resist all sorts of urban fantasy worthy creatures, you absolutely need All Those Explosions Were Someone Else's Fault by James Alan Gardner in your life. I will definitely have to check out more of his work in the future.