The King of Bones and Ashes by J.D. Horn (ARC) - Review 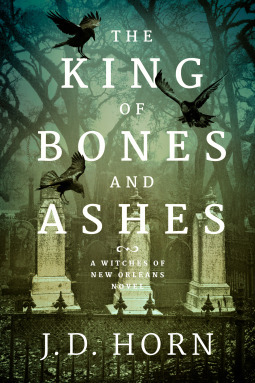 Magic is leaving this world, making the witches who've relied on it forever absolutely helpless. Some are willing to accept it, while others are willing to do whatever it takes to stay in power. Alice is using her remaining power to solve the mysterious disappearances of those in occult circles of New Orleans. She knows the feeling as her family put in an asylum and she just recently got out. She's afraid that her family is connected, and the more she investigates the more she comes to realize that her fragile psyche may be in trouble. Figuring this out, though, may be her only way to get out from under her mother's thumb while determining the future of magic.

The King of Bones and Ashes by J.D. Horn sounded like it would be exactly my kind of read. There are so many elements that I love - magic and witches, atmospheric setting (New Orleans), voodoo, warring families, and more. Unfortunately, I ended up preferring the concept to the final product. The novel travels at far too slow of a pace for me, and it follows far too many characters to get thoroughly invested in anyone. I liked Alice quite a bit, but I wish that the story would have focused primarily on her (and perhaps one or two others at the most) rather than bouncing back and forth between its enormous cast. There are a lot of characters, and there were many times I had trouble keeping everyone straight in my mind - definitely took me out of the story to have to keep flipping back to the cast list. Overall, J.D. Horn's new release just wasn't for me in the long run, although I wish I could say otherwise. I still would like to try his Witching Savannah series, which is described as a Southern Gothic urban fantasy with witches.