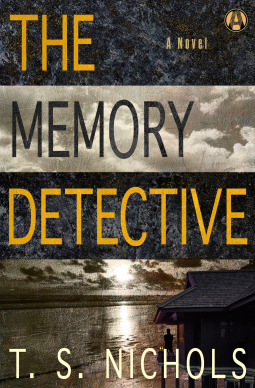 In order to do his job, Cole undergoes surgery to receive the implanted memories of murder victims. After he recovers from the eight hour operation, he can remember the thoughts of someone else - right up until the moment of their death that is. Sometimes these memories are fuzzy, but others are perfectly clear. Cole's cases completely consume his every waking moment, leaving him without much of a personal life but that's how he prefers it. He will do whatever it takes to solve the case and track down the killer. While Cole is working his most recent case, however, he begins to suspect that someone else is using the memory-transfer tech for another purpose altogether. Cole isn't far off, in fact, he's the only one standing in the way of a ruthless company harvesting people's most intimate memories and eliminating anyone standing in the way.

The Memory Detective by T.S. Nichols has so much potential. The concept behind it is absolutely fantastic, but it never quite hits that mark in execution. I liked getting a look into this author's take on near future technology. I was particularly interested in the consequences of the memory-transfer surgery. Everyday people can receive only one sometimes two transfers, but Cole is the exception to the rule due to his detective skills. He's had many more transfers than the average person could ever hope to receive - and the consequences are high. Think insanity. Unfortunately, I couldn't really connect with Cole because he feels too distant and a little flat. If this novel were told in the first person, I think that would have definitely helped get us into his head. I don't know about you, but with the memory subject matter I think that could only be a good thing. Also as much as I enjoyed the tech, there were moments when I was left wanting more when it came to some of the details regarding how the process all worked. During my entire reading experience, I totally had iZombie in the back of my mind. It's a very similar concept - aside from the zombies and brain eating part, of course.

Overall, The Memory Detective features a good mystery and intriguing near future sci-fi elements. The cast of characters could definitely afford to be more well drawn and developed in order to connect better with them on the whole. The story has a lot of potential to be great, but it doesn't quite hit the mark, plus it isn't terribly unique. You may want to give T.S. Nichols first novel a try if you enjoy iZombie and Total Recall.