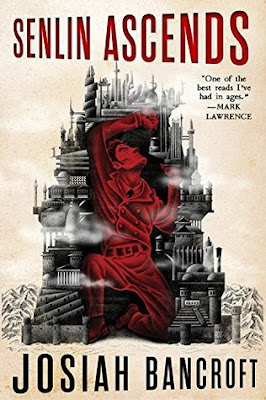 Thomas Senlin, the headmaster of a small town school, and his new wife, Marya, are honeymooning at the Tower of Babel. Unfortunately, they get separated from one another in the crush of fellow tourists and citizens. Senlin is determined to find his wife, but first he'll have to survive the city and the Tower if he doesn't want to be chewed up and spit back out. One thing is for sure, if he ever wants to see Marya again he's going to have to do much more than just survive - he'll have to endure everything from theaters, madhouses, flying airships, and assassination attempts.

I'm so lucky to have had the chance to read this brilliantly imaginative and unique series opener. Bancroft's novel caught and hooked me right from the start. The novel really delivers with only a few minor issues from me. First things first, the world building of Senlin Ascends is stunning. The world of the Tower is so vivid that it practically jumps off the page. As far as I'm concerned the Tower is its own character. I loved getting to know it and it's unknown number of ringdoms filled with geniuses, tyrants, and people just trying to scrape by. By the way, a ringdom is a kingdom of each level of the Tower - think of the stacked layers of a cake.

Secondly, in regards to the characters of the novel, I really appreciated Senlin's journey. He goes from being a fairly grating yet intriguing, to possibly one of my favorite characters of recent memory. He's really put through the wringer and I'd say that he comes out a much better person on the other side. I found myself easily able to connect with him. I can't really say the same for Marya though, except for the few chapters we get from her perspective because there she started to feel like more of a fully formed character as she comes into her own.

Finally, I want to mention the pacing of the novel. The story is pushing 450 pages. Fair warning, but I thought could be trimmed down a little bit. As much as I was engrossed in the beginning while learning so much about the world and the ending, there were a few points in the middle that started to drag and I caught myself nearly zoning out, especially in regards to later Parlor scenes.

Overall, I highly recommend Senlin Ascends by Josiah Bancroft. It's a fantastic debut fantasy series opener that is incredibly unique, and also brutal. I couldn't resist this brand of alternate history fantasy. If you like High-Rise by J.G. Ballard or The Great Library series by Rachel Caine, I have a feeling that you'll be hooked on Senlin Ascends. I can't wait to continue this series with Arm of the Sphinx.

View all my reviews