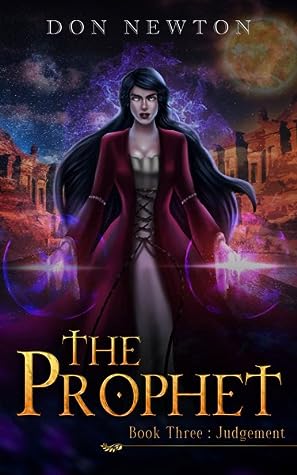 The Draggon King, Darkonus, died at the hands of his daughter - the cold steel of her dagger taking his life, and the void-wraith trapped within sucking his soul away. Now Kat has ascended to the Draggon throne and become their Queen.

Judgement (The Prophet #3) by Don Newton is such a good finale to what has been such a fun genre mashup series. I know I've said it before, but I'm lucky to have had the opportunity to experience this series. Each installment took the series to new heights and that is no exception here in book three.

As with the first two entries of The Prophet series, Don Newton's style and world-building are the strongest elements and my favorite part of the book as well. I've always appreciated a genre mashup when done well, and this is right up at the top of the game. Traditionally fantasy and science fiction elements are brought together masterfully. We get to see everything from the magical to the high tech, dragons to space ships, and even the multiverse. Not everyone could pull off such a combination, but in this case they all work together pretty seamlessly. I particularly enjoyed getting a bit more a wider look into the world of the series that we didn't have the chance to see much of before. The style overall kept me hanging on for more and it's quite a fast paced read. It doesn't waste a single page of its fairly short length. Plus, it keeps you on your toes with the plenty of surprising moments that makes you wonder how it will all come to a close.

Overall, Judgement (The Prophet #3) by Don Newton is definitely worth your time if like me you can't resist a cool mashup, or unique science fiction and fantasy. Luckily, this novel, and this series, ends well. It leaves you wanting more, but wraps things up in a nice spot to say goodbye. On that note, I'm looking forward to Newton's upcoming release which is set follow a teenage version of Alisha before we get to know her in this series.
My review is also available on Reedsy Discovery and Goodreads.