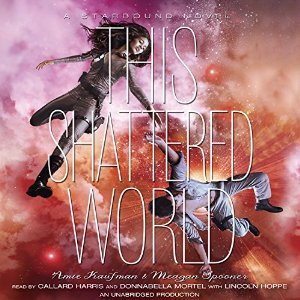 Lee Chase is the captain of forces sent to Avon to put a stop to the terraformed planet's rebellious colonists. Flynn Cormac's sister lead the original uprising ten years ago on Avon against the corporations that brutally rule the planet. The corporations promise a better life to the colonists, but they have failed the inhabitants of Avon, and now Flynn finds himself leading the rebellion. Chase and Cormac never should have met, but he does the only thing that makes sense to him when their paths do cross to gain an advantage. He takes her prisoner and takes her back to his base. His fellow rebels plan to execute her rather than use her for all they can. At that moment Flynn makes a decision that will change the rest of his life. He and Lee escape the base, and find themselves caught in the middle of a senseless war.

This Shattered World by Amie Kaufman and Meagan Spooner is the sequel to the 2013 release These Broken Stars. I didn't really know what to expect with the first installment, but it was certainly a pleasant surprise. I really liked the sequel, too, but I think I liked the first more. That's not to say this one isn't good - I just wasn't as impressed by it. The authors continue to do a fantastic job of world-building and action scenes. Our two leads are well-written and quite diverse. Personally, I liked the incorporation of Irish mythology on the rebels part. There is also a slow burn romance which gets no complaints from me, but I preferred the politics and intrigue more than anything. My favorite aspect of the entire story had to be Tarver's cameo (yes, Tarver from These Broken Stars) - and he has some great moments here!

Overall, This Shattered World is a great installment of the Starbound series, but, for me, it didn't quite match the greatness of book one, but it is still a must-read, especially on audio because the production is excellent. I'm definitely looking forward to book three, Their Fractured Light.