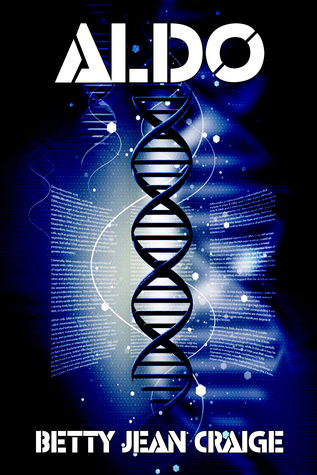 I received an ARC from the publisher for an honest review.

On the same day that Isabel Canto, associate director of Pembrook Atlantic University's Institute for Genome Modification, discovers she is pregnant with IGM post-doc Frank Marks's baby, Pembrook Atlantic University's president Mary Ellen Mackin receives a letter from "Aldo" threatening harm if she does not dissolve the institute and fire its director. Isabel recommends that Mackin refuse, and not allow a terrorist to dictate what her faculty and students can research and discover -- setting off a chain of events that will change many lives forever, including her own.

Aldo by Betty Jean Craige sounds like a fantastic read. When the publisher pitched this ARC for me to read for review, I was very intrigued by the sound of this mystery/ thriller with a dash romance. I don't read this sort of novel often, but this sounded like it could be a real winner. Unfortunately, I ended up preferring the concept behind this story to the actually execution of the story. One of my major issues is with characters and dialogue. Throughout the entire story I had a difficult time keeping track of who's who. It doesn't help that so many screen names and abbreviations are used, but what really made it difficult for me is that all of the characters seemed rather flat and toneless. This story is also billed as a mystery, but it isn't much of one. I classify it as more of a thriller, but without the level of tenseness that I prefer (again, that's could be a side effect of not caring about any of the characters since it's so difficult to keep track of who's who).

Overall, Aldo is an interesting story that makes some fascinating debate points on various issues, but it could definitely do with a little more work to make it more readable and enjoyable. There are the makings of a great novel here, but as it is now I prefer the idea of the story.