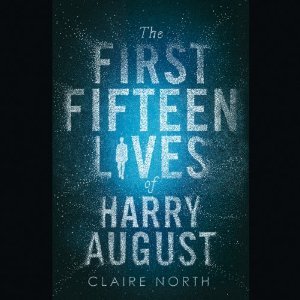 Harry August is an Ourobouran, a person who lives, dies, and is reborn to live life again and again. He is also part of a secret society of fellow Ourobourans called the Cronus Club. Harry's also a mnemonic which is fairly rare among his people because that means he has near perfect recall of everything that's happened during his previous lives. Anyway, the plot of his story takes off when Harry is on one of his deathbeds when a little girl Ourobouran passes him a message that's been passed down to her from a thousand years in the future. The message is that the world is ending (not much of a surprise there), but it's coming much sooner than it should be because with each life cycle the end of everything is getting closer. And, that can only mean one thing, an Ourobouran near Harry's timeline is screwing around with history.

I have no idea how I had never heard of this 2014 literary sci-fi time travel thriller before now, but I'm glad I stumbled upon it while browsing through library eAudiobooks. This is one of those novels that it's best going into nearly blind. Claire North's world building is fantastic and the twists and turns kept me on the edge of my seat. I didn't want to take off my headphones - the narrator does a great job and gives an excellent performance, by the way.  Fair warning, though, it isn't always told in a linear fashion which does mean the style takes a little bit of getting used to. The highest praise I can give this story is to describe it like this: it's Kate Atkinson's Life After Life as told by Neil Gaiman multiplied by Groundhog Day on an IV of Red Bull. If that doesn't make you want to want pick up this novel, I don't know what will.

Overall, I highly recommend The First Fifteen Lives of Harry August by Claire North. It a non-standard time travel novel that will absolutely reel you in from the first few chapters and has plenty of great twists and outstanding world building to keep you hooked. If you like Groundhog Day, Life After Life, Neil Gaiman, Doctor Who and The Bone Clocks by David Mitchell, then you may also enjoy The First Fifteen Lives of Harry August. I will absolutely need to read more from Claire North in the future.

I listened to this audiobook from March 7 - 9, 2018 and my review is also on Goodreads.