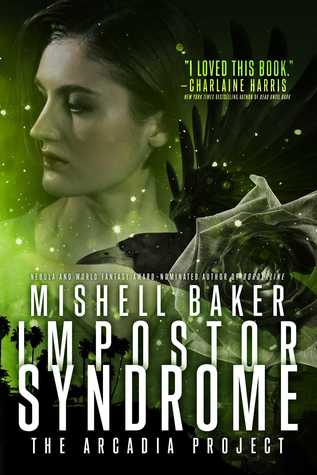 The Arcadia Project was torn apart three months ago with half of the fey courts supporting L.A. and the other half staying loyal to London - and London is doing all it can to take out the resistance. Unfortunately, due to a backslide in her mental health, Millie is in no shape to fight. London's first move is to frame Millie's partner, Tijuan, for murder and Millie has no choice but to do all she can for him to clear his name. The key to saving Tijuan and winning the revolution is locked in the White Rose in the heart of Arcadia under the fey Queen's nose. It's all up to Millie to pull off a heist that could potentially shape the future of the human and the fey worlds. She'll just have to convince everyone, including herself, that she knows what she's doing.

The Arcadia Project by Mishell Baker is one of my favorite urban fantasy series and I think Impostor Syndrome, the final book, is my favorite of the three. There's just so much to love about the novel. Millie herself is a key element of my love of this story. She's physically disabled and she has Borderline Personality Disorder. She is such a complex, unique, and compelling character - one of most fascinating that I've had the pleasure to read. I particularly love her unvarnished honesty, especially when it comes to Caryl. One of my other favorite aspects of this story is Baker's take on the fey - the Unseelie and Seelie Courts. She takes many traditional elements and completely manages goes her own way with that realm's inhabitants. Finally, I also like unspooling the mystery alongside our main cast of characters.. I'm sad it's over, but I don't think I could have asked for a better finale. Baker still leaves some things open, and I have to admit that I like that she doesn't just wrap up everything neatly in a bow.

Overall, Impostor Syndrome by Mishell Baker is a brilliant conclusion to The Arcadia Project series. The author does a wonderful job of continuing to develop the world of the Project, her characters, and the fey. This novel will easily be one of my favorite reads of 2018! If you like diverse urban fantasy, Seanan McGuire, and Daniel José Older, then you may also want to try this series. I'm looking forward to Mishell Baker's future works.