Becoming The Dragon (The Dragon Inside #1) by A. Sapegin - Review 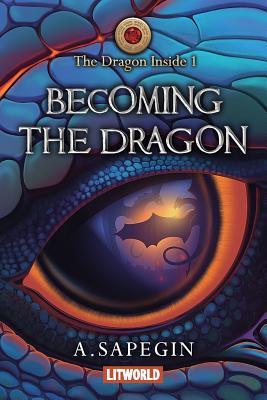 I received a free copy of this novel from the publisher in exchange for an honest review.

Andy, a small town teen, survived being hit by lightning when he was younger, which makes electronics act up around him and gives him dormant magical powers. After accidentally walking into a lab experiment, Andy suddenly finds himself teleported to another planet which is inhabited by both human and supernatural beings. As soon as he arrives he accidentally frees Karegar the Dragon, then gets captured and enslaved. When fatally wounded, he undergoes a ritual to become reborn as a dragon, a.k.a. a Master of Heaven. He has a long way to go if he wants to master his new powers, not to mention his new body. Whether Andy knows it or not, he's destined to play a major part in a war for the future of two planets, as well as his home-planet, Earth.

Becoming the Dragon by Alex Sapegin is the first book in The Dragon Inside and I had a difficult time rating this story. I liked the portal fantasy (and sci-fi) aspect of the novel, the worlds, and magic system created by the author, but it took me a little while to really become interested in the storyline. The pacing is kind of all over the place throughout, especially in the beginning. Some of the early scenes with Andy on Earth actually feel tacked on instead of augmenting his character. They're like subplots that strictly speaking aren't necessary, no matter of how fun they are at the time. On a similar note the writing style is uneven - I'm not sure if that's due to the translation into English to Russian. I also found it difficult to keep on top of the wide cast - it's a good thing there's a who's who section. I'm not sure if this is an effect of the translation, or if it's just a sign that I had a difficult time connecting with the cast.

Overall, Alex Sapegin's series opener Becoming the Dragon is a decent portal fantasy/ sci-fi novel. The book is a fun read but there are some issues that stood out to me. It could use some work in regards to pacing and connecting with everyone in story.

Thanks again to the publisher!