All Thy Sons by K.M. Breakey - Review 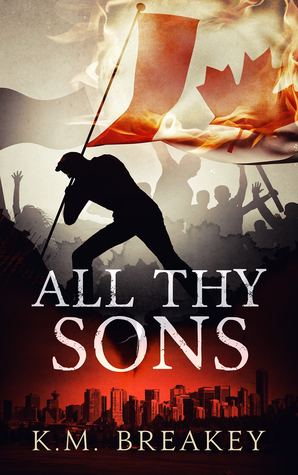 Life’s unfolding on schedule for Tony Fierro. Raised in Vancouver by a loving Catholic family, he’s blessed with good looks and self-confidence to burn. He gets the job. He woos the girl. He has the world by the tail. But the world is acting strangely. Irrationally. Immorally. Tony questions the progressive mantras that pervade modern-day culture, but quietly. Better to ignore them, laugh at them, even as the absurdities multiply and turn dangerous. His pal Ivan senses the evil lurking and warns of impending calamity. But Ivan’s paranoid. An alarmist. He always was. Tony’s got better things to do, like raise his boys, pay his mortgage, live his life. When tragedy strikes, Tony’s world crashes. He wakes from his slumber and sees a country at war with itself, a government complicit in the destruction, the pattern playing out across the Western World. He can no longer stay silent, but will his message cross the line as a new Dystopian order rises. All Thy Sons explores a hellish future of chaos and racial violence. A future where remaining First World sanctuaries vanish with stunning rapidity. What happens when there’s no safe neighborhoods, or cities, or countries? Do we lapse into tribalism? Do we rise? Or does a new master rise?

All Thy Sons is K.M. Breakey's newest release and as a fan of his previous releases, Johnny and Jamal and Never, Never and Never Again, I jumped at the chance to dive into it. Of all of his novels, this is the most difficult to rate. His style is fantastic as always. His writing and characters are engaging and present a thought provoking dialog along political lines. We get to see a variety of ways of looking at life and society. Tony, our lead, is multifaceted and an intriguing perspective character. He isn't pc, but his perspectives are a great way to view oncoming/ current dystopian world he now finds himself in the middle of. I don't know a whole lot about Canadian politics, but the last few years I've been paying more attention to U.S. politics than ever before. Doesn't matter what side of the aisle I fall on, but lately so much of what has been going on in the White House and federal government absolutely blow my mind, doesn't make sense to me, and in some cases makes me angry to even think about. That's part of what makes this book difficult to rate - that it feels all too plausible, ripped from the headlines, and too close to home in many ways. Honestly, I think I prefer fictional politics with tinges of real world to something that feels as maddeningly real as this.

Overall, All Thy Sons by K.M. Breakey is an up-to-the-minute dystopia. It may not be for everyone in the end, but it is certainly worth picking up especially if you enjoy K.M. Breakey's style. Even though I'm not Canadian, it felt a little too close to home for me. Even though it's quite political, the story presents a provocative near future dystopian world that seems to get closer as the minutes go by.