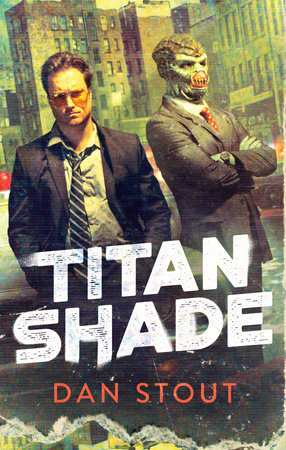 Carter's a homicide cop in Titanshade, an oil boomtown where 8-tracks are state of the art, disco rules the radio, and all the best sorcerers wear designer labels. It's also a metropolis teetering on the edge of disaster. As its oil reserves run dry, the city's future hangs on a possible investment from the reclusive amphibians known as Squibs. But now negotiations have been derailed by the horrific murder of a Squib diplomat. The pressure's never been higher to make a quick arrest, even as Carter's investigation leads him into conflict with the city's elite. Undermined by corrupt coworkers and falsified evidence, and with a suspect list that includes power-hungry politicians, oil magnates, and mad scientists, Carter must find the killer before the investigation turns into a witch-hunt and those closest to him pay the ultimate price on the filthy streets of Titanshade.

I can now officially say that Titanshade by Dan Stout is one of my favorite reads of 2019! The description and cover (art by the amazing Christian McGrath) totally reeled me right off the bat. Luckily for me, the novel really delivers in the best ways. It's a gritty fantasy sci-fi noir and the best way I can describe it is that it's a great combination of The Dresden Files by Jim Butcher, Dirty Harry, Dragnet, LA Confidential, and Chinatown all rolled into one. I didn't realize I needed that until now and now that I'm done I definitely need more of the genre. I've got my fingers crossed that we'll see more from this world and these characters in the future. The characters, particularly Carter, are all wonderfully complex and can practically walk right off the page. The pacing and dialogue are absolutely crackling. The author also does a fantastic job of creating the detailed world of Titanshade itself - it's practically a character in its own right. Anyway, I also loved just how original and inventive this novel is. I can't say I've every read anything quite it before, but I hope I can say I have in the future.

Overall, Dan Stout's Titanshade is one of the best debut novels I've had the chance to read in ages. I need to return to this world stat. No matter what, I know I need more of the author in my life. Thanks again for the opportunity, NetGalley!