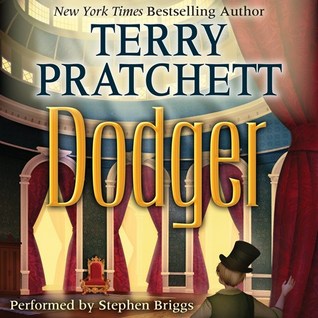 Dodger, a seventeen year-old street urchin, is a tosher and he knows a treasure when he sees one. That's why he saves a girl he doesn't know from being kidnapped. He doesn't realize the impact his actions will have on some of the most powerful people in England and just how much his life will change as a result. Dodger runs across the likes of Charles Dickens, Benjamin Disraeli, and Sweeny Todd in this imaginative historical-fantasy by Terry Pratchett.

I listened to the audiobook of this story and I enjoyed every second of it. Terry Pratchett's historical-fantasy is wonderful, and subtle enough to just slightly warp history. I really got a kick out of Dodger's interactions with Charles Dickens, since Dodger goes on to be the inspiration for the Artful Dodger in Oliver Twist.

That being said there were quite a few moments that went something like this:

If you're interested in Dickensian and Victorian London, Pratchett's style and sense of humor, and subtle historical-fantasy, you can't get much better.