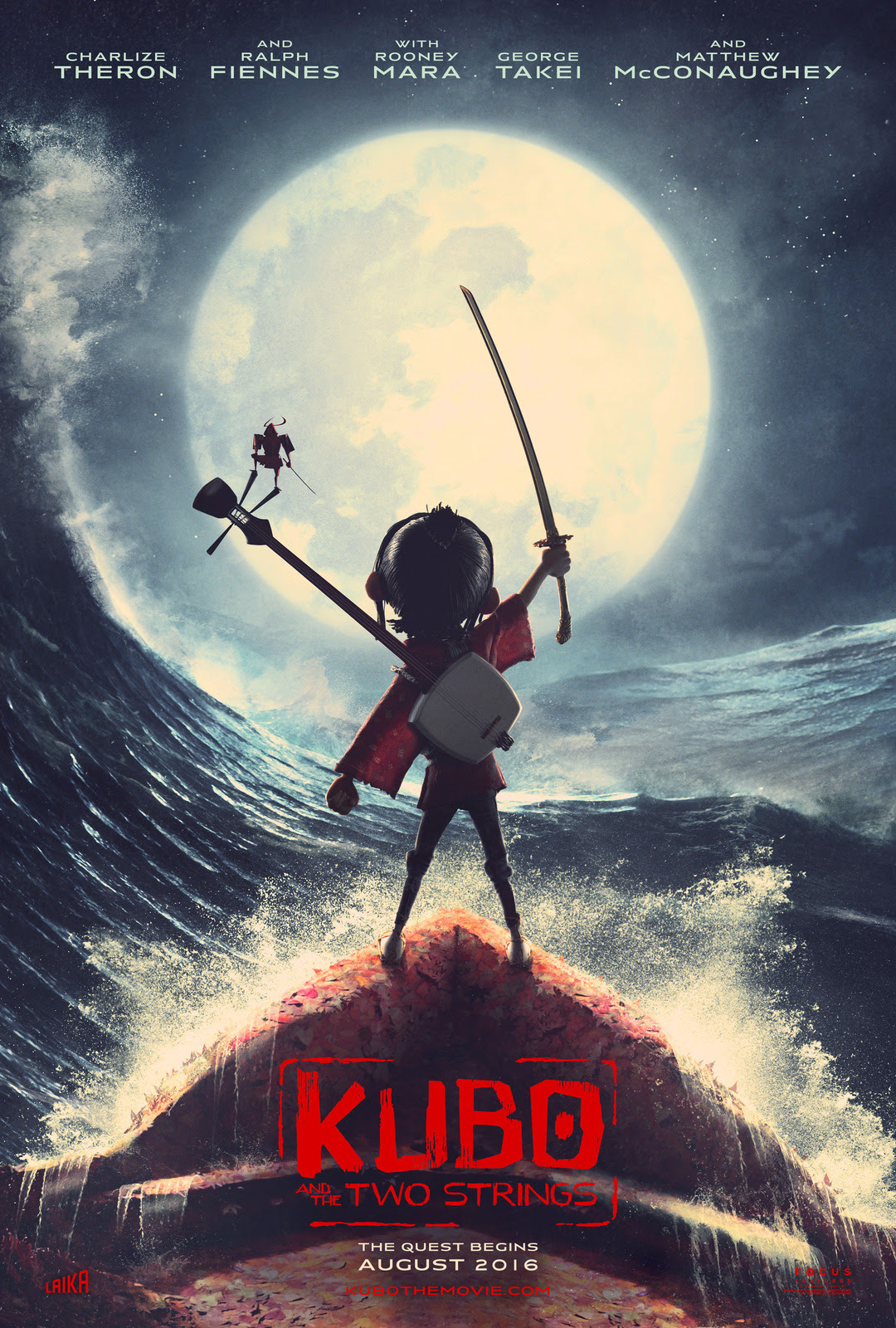 Kubo lives a quiet life with his mother just outside of a coastal village in ancient Japan.  He helps take care of his mother and performs in the village as a storyteller with his magical shamisen.  His mother has always told him come home before dark for his own safety, but one evening during the festival, he doesn't make it home in time and before he knows it his entire life has been turned upside down as a decade old vendetta has been reignited.  Soon Kubo finds himself on a quest to find a suit of armor that was once his late father's, a legendary Samurai warrior, while being pursued by gods and monsters.  This young artist is going to have to learn how to be a hero.

LAIKA Animation is quickly becoming one of my favorite studios to watch as I have enjoyed all of their previous films, Coraline, ParaNorman, and The Boxtrolls.  Their newest release, Kubo and the Two Strings, is one of the best movies I've seen this year.  LAIKA movies have a unique look and the stop motion animation here is stunning, from the most basic elements to the awesome storytelling sequences, and epic battles.  In the same vein, the movie has the perfect score that when combined with the visuals really transport you into Kubo's world.  This is one of those soundtracks that I believe I'll have to buy so I can have the pleasure of listening to over an over.  By the way, the Regina Spektor's contribution to the soundtrack, "While My Guitar Gently Weeps", plays during the end credits, so you'll have to stick around to hear that and to watch the animated first half of the credits.

The story and the characters of this movie have a lot of heart and it packs quite an emotional punch.  I rarely tear up watching movies, but my eyes actually felt misty during a couple of scenes.  If I had known I probably would have taken tissues with me.  One of the things that I really loved about this story is that it's a Japanese culture based fantasy adventure and that all characters are fully developed.  I loved watching Kubo's journey from a storyteller with a touch of magic to a full-on hero who's full of magic.  Storytelling has such an important role for both Kubo and in the film as a whole.  All of the characters are well drawn, and even the villains are well done - Kubo's aunts are so creepy and the Moon King is voiced by Lord Voldemort.  Plus, Beetle, a samurai who believes he once knew Kubo's father, provides comic relief to diffuse the tension.  Of course, I have to mention Monkey, who acts as Kubo's guide on his quest, also gets some great scenes.

Overall, I can't recommend this film enough.  If you've enjoyed LAIKA's movies, you have to see Kubo and the Two Strings.  Regardless, this is a must see movie for all ages.  It's incredibly unique and refreshing.  It's dark and has an edge to it, but it's also a bittersweet tale of courage, love, loss, and family at it's heart.  I can definitely say that I've never seen anything quite like it before - it's great to see a movie that is so original.  I fully expect this film to win the Academy Award for Best Animated Feature Film.

I saw the movie on Sunday, August 28th at 12pm.  There were seven others watching with me - a mother, daughter around ten, and grandmother as well as a mother with two younger kids.

Everyone was enthralled during the movie, including the two younger kids sitting in the row in front of me.  I'm pretty sure I heard some sniffling at one point (it wasn't just me tearing up).

Trailers included those for A Monster Calls (I'll need a few boxes of tissues to make it through this one!), Sing (Taron Egerton from Kingsman: The Secret Service is voicing Johnny the gorilla!), and Moana (Disney's newest offering!).

Watch the trailer for Kubo and the Two Strings here: