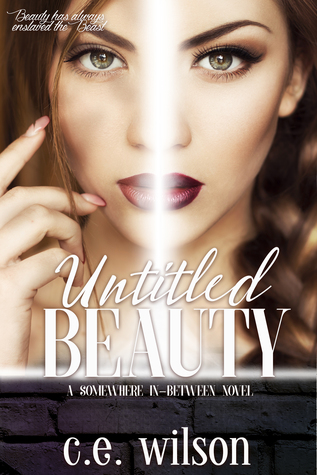 I received Untitled Beauty free from the author as an eARC in exchange for an honest review.

In Grace's world, your entire life hinges on your physical beauty. If you're rated as a Beauty, you live in government sanctioned luxury with every advantage and benefit handed to you. However, if you don't rank as a Beauty, you're not much better than a lowly slave for the ruling Beauty class. You have five chances to be judged as a Beauty - at birth, age five, twelve, eighteen, and twenty-five. During your judgment, you're ranked on a scale of one to twenty with twenty earning you the title of Beauty. Grace, now age seventeen, has fallen from an eighteen down to an eleven, but this has earned her the distinction of being a Potential. A Potential, if they have been sponsored to receive the proper training and surgeries, could be upgraded to a Beauty. Grace just been purchased by a brutal new sponsor who could see her from a Potential to a Beauty, if she follows his every whim she could finally be free.

I wasn't quite sure what to expect from C.E. Wilson's newest novel, but I was hooked on Grace's story from page one. It's such a quick read that kept me speeding through those pages and it doesn't shy away from difficult topics like slavery, servitude, othering, and physical, mental, and emotional abuse. If you're interested in diving into a frightening new dystopian world, you'll have to begin this brand new series. Grace, aka Eleven, is a very-well developed character. In the toughest of times, she never loses her hope that one day she'll be able to improve upon and rise above her current status as Potential, a non-person in the eyes of the ruling Beauties. I also grew to like Reese quite a bit, although it is difficult to truly begin to trust his character - just as it's difficult for Grace to do the same. I'm especially interested in the possible conspiracy that he may have stumbled across regarding the rankings. I can only say that I wish that we got to know a little more of the wider world than we did. I suppose that means I'll have to continue with book two to learn more of Grace's future.

Overall, I think C.E. Wilson is consistently becoming a better writer, and I'm glad that I took a chance on Untitled Beauty. Her characters are her strong suit, but it was also interesting to see her take on difficult issues and see the characters she has created begin to overcome what's systematically being done to them. I'll definitely be reading the second book in her new Somewhere-in-Between after that ending. I need to know more!