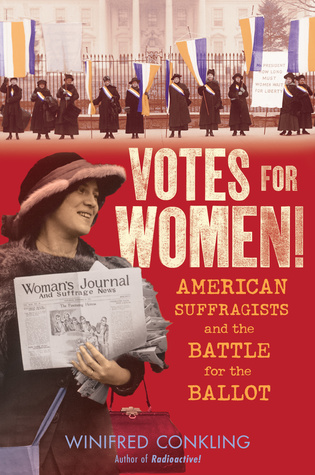 I received a free copy from NetGalley in exchange for an honest review.

The 19th amendment was finally ratified on August 18th, 1920 granting women the right to vote as citizens of the United States of America. This work of narrative non-fiction discusses the suffragists achievements, politics, and their passion from Susan B. Anthony, Elizabeth Cady Stanton, Victoria Woodhull, Sojourner Truth, and Alice Paul. It also focuses on the darker moments within the movement in regards to their relationships to both the abolition and temperance movements.

The women's suffrage movement is a fascinating time period to read about as are the women at its forefront. Votes for Women!: American Suffragists and the Battle for the Ballot by Winifred Conkling is a detailed and comprehensive look into the suffrage movement and the nineteenth amendment. I love that the author gives us a look into the personal journeys of women at the heart of the fight from the early days right up until ratification, more than one would usually find in a course on the topic. The primary sources that she reference really show off each voice in the fight. I could also definitely appreciate that the author explores why the suffragists had such a tense relationship with those on the side of the abolition and temperance movements - she doesn't shy away from the darker side of the battle. The only downside to this work of narrative history is that at points it becomes too dry, as if you were reading a textbook, but overall the author does a great job of keeping it engaging and timely. Personally, my favorite part was getting to see Victoria Woodhull, the first woman to run for President of the United States in 1872 and a woman far ahead of her time, get some much deserved page time, especially since I'm from Victoria's hometown.

Overall, Winfred Conkling's Votes for Women!: American Suffragists and the Battle for the Ballot is a must read for anyone interested in the suffrage movement, suitable for both adult and YA readers. It's an eye-opening read covering a nearly eighty year struggle. Know a budding feminist, or someone interested in American history, then put a copy of Conkling's new nonfiction release in their hands.

I read this work of narrative nonfiction from February 7 - 8, 2018 and my review is also on Goodreads.  Votes for Women! will be released on February 13th.