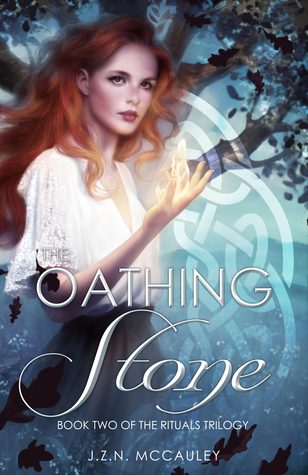 I received a free eARC in exchange for an honest review.

After spending the last year together, Catherine and Bowen are finally ready to take the next step in their relationship and get married. As a couple made up of an ancient druid doctor and a woman with druid magic from the sacred oak tree, they'll have to have a traditional Celtic marriage ceremony. In order to connect with their ancestors and the sacred location of their discreet ceremony, they'll have to select an oathing stone. On the wedding night, Catherine's magic becomes unstable. Meanwhile, the Fae Kings send a Fae spy to check out Catherine's magic disrupting her life and her friend Bella's life when she becomes the spy's obsession. After Bella goes missing, it's up to Catherine to find her. Really, though, their problems are just beginning because they've just landed right in the middle of a Fae civil war.

Although I was slightly underwhelmed by book one in this series, Oak and Mistletoe, I was still interested in seeing where the sequel would go, especially with the way the first installment ended. Here, I particularly liked that we got to see a little more magic and how McCauley incorporates the Fae. Unfortunately, though, Catherine's a bit flat here - she flips back and forth between weak and helpless to strong and magical enough to give me whiplash. I have to admit that her relationship with Bowen kind of bugs me too, especially considering what happened to her twin in book one. Also , in regards to the magic which was fun to see more of, I really wish we learned more about the why and the how it works for Catherine other than the fact that she is favored. On the same note, I was also left wondering more about why the Fae are after her in particular.

Overall, The Oathing Stone is still fun and fast, almost too fast at times, with many elements I enjoy. However, there are still more things that I wish had been addressed. Perhaps that's a good reason to come back for the final book in the trilogy to see how everything turns out and where that leaves our cast. If you're interested in Ireland, druids, mythology, and romance, you may want to try this second book of an NA trilogy.