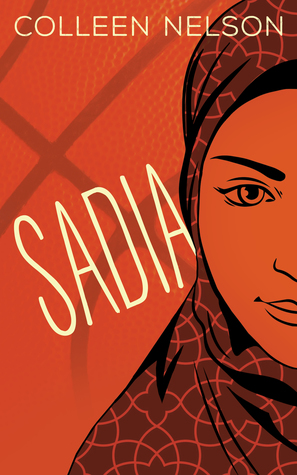 Canadian Syrian Sadia is a Grade 9 student who is incredibly passionate about basketball. She jumps at the chance to join this year's co-ed tournament team and her talent speaks for itself. The hijab that she wears as a Muslim, though, can pose a problem on the court. Surrounded by her teammates, her coach and teacher, and a new friend, a Syrian refugee named Amira, she learns to stand up for herself and fight for what's right.

This novel does a very good job to raise awareness and promote compassion between people. It's also a decent story if you're reading it for the basketball elements. This quick novel has been promoted YA, but it definitely reads tonally as MG. It's actually quite tame, but it still manages to raise several important questions - both on a personal and institutional level. In regards to the characters, as much as I liked getting to know Sadia, her friends, and family, I actually found myself rooting for their coach a little more. He's the sort of teacher I would have been honored to have as a high school student.

Sadia by Colleen Nelson is an inspiring story of a girl standing up for what she believes in and is passionate about. That said it doesn't particularly standout of the crowd. I also have to admit that I was expecting more from some of the basketball games we see on the page after all of that buildup. Just so you know, this novel doesn't qualify as #OwnVoices, but Colleen Nelson still offers insight as she is also a Canadian teacher who has taught refugee students.