Oak and Mistletoe (The Rituals Trilogy #1) by J.Z.N. McCauley - Review 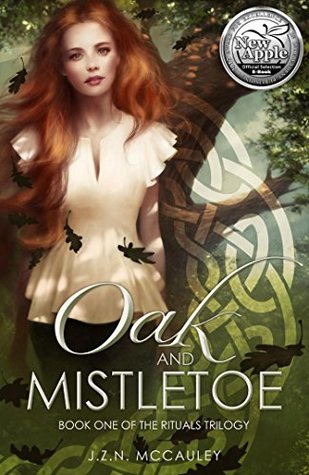 I received a free ecopy in exchange for an honest review.

Catherine Green, her twin sister, and her brother have the opportunity to travel to Ireland as a college graduation present. Catherine's visit becomes permanent when she lands a job at a museum. She finds herself oddly attracted to Bowen, a stranger who's a sort of expert on local history who warns her to leave the country before it's too late. Catherine quickly begins to realize that she's actually the key to a centuries old curse as she frees a psychotic druid and his followers. Tragedy ensues and Catherine is forced to work with Bowen and together the two get swept up on an adventure involving Celtic myth and long-forgotten knowledge. The two going to have to work together to make sure sure Conall doesn't put his evil plans in motion, and they'll have to do whatever it takes.

Oak and Mistletoe is the first book in The Rituals Trilogy by J.Z.N. McCauley, and is a New Adult fantasy with a clean romance. The overall concept behind the story is pretty cool and I love that it features druids and Irish mythology. Since I was reading a novel of The Iron Druid Chronicles while reading this story, I have to admit that I would have been very pleased indeed if Atticus O'Sullivan could have had a cameo. Between Catherine and her twin Kathleen, I was definitely more interested in Catherine, but I have to admit Kathleen does get a moment of really great character development before she meets her untimely fate. In regards to the magic, I liked what we got to see of it and I would have preferred to learn more about how it all works - I'm just not all that sold on what makes Catherine the key (it's all to do with Bowen). On that note, I couldn't really get behind their romance since he withholds a good deal of vital information from her (view spoiler)[that could have saved her twin (hide spoiler)] in order to "keep her safe".

Overall, though, Oak and Mistletoe is a fast paced, fun read despite my issues with the story and characters because there are still so many elements that I enjoy. If you're interested in Ireland, druids, mythology, and romance, you may want to try this series opener.