October 15, 2019
Happy Tuesday everyone!  I'm very excited to welcome you all to my leg of the Naked Mole Rat Saves the World blog tour!  Today, you'll find the details and summary for this novel,  an excerpt, and an about the author, Karen Rivers.  Thanks for visiting my stop on this blog tour! 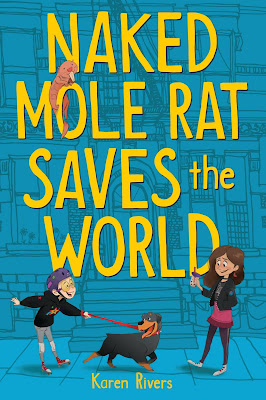 
Can Kit’s super-weird superpower save her world?

Kit-with-a-small-k is navigating middle school with a really big, really strange secret: When she’s stressed, she turns into a naked mole rat.

It first happened after kit watched her best friend, Clem, fall and get hurt during an acrobatic performance on TV. Since then, the transformations keep happening—whether kit wants them to or not. Kit can’t tell Clem about it, because after the fall, Clem just hasn’t been herself. She’s sad and mad and gloomy, and keeping a secret of her own: the real reason she fell.

A year after the accident, kit and Clem still haven’t figured out how to deal with all the ways they have transformed—both inside and out. When their secrets come between them, the best friends get into a big fight. Somehow, kit has to save the day, but she doesn’t believe she can be that kind of hero. Turning into a naked mole rat isn’t really a superpower. Or is it?

KIT’S MOM HAD A TATTOO THAT WOUND AROUND HER LEFT WRIST.

The ink was faded like something that had been washed so many times it had gotten thin and holey and was now just a blurry memory of black.

If you looked closely at the tattoo, you could see that the leafy, twining ink wound its way around three tiny, fancy letters—k and i and t—which stood for keep it together. It also spelled kit’s name, which was kit, not Kit, because when kit was a baby, her mom said she was much too small for capital letters. Back then she fit inside her mom’s two hands, a funny wrinkled thing that looked not-quite-ready to be alive, more like a hairless baby animal than a human being.

“My little naked mole rat,” her mom would say every time she saw the first photo ever taken of kit, which had been stuck on the fridge for most of kit’s life. Then she would put her hand on her heart.

One day, kit took the picture down and slipped it into a drawer and her mom didn’t say it as much any- more, which was good because it didn’t exactly feel like a compliment.

Kit’s mom had had the tattoo for years before kit existed at all.

“Because I knew you were coming,” she said.

Kit’s mom often told people that she was searching for kit for her whole life and the tattoo was the map that she followed to find her. She said that when she found kit, she was saved.
<
Found made it sound to kit like she was not someone who was born, but instead someone who just appeared, maybe in a box on the doorstep. Even though kit knew this wasn’t true, she sometimes dreamed of scraping her fingernails against cardboard walls, scrabbling to get out. She also thought that being responsible for saving her mom was an awful lot of pressure. Not that she’d ever say anything; she knew her mom loved that story and the way she told it made kit feel things she didn’t usually feel. It made her feel heroic and kit normally had a pretty hard time imagining that she’d ever be able to save anyone from anything. She was too small to be a hero.

She could still sometimes fit into clothes labeled 6x.

“The size in your shirt should be the same as your age,” Clem told her once when they were shopping at the Brooklyn Flea, which was the best place in the world to find stuff you didn’t know you needed, and kit had felt worse than if Clem had reached over and punched her right in the nose.

Clem was also small, but not nearly as small as kit. She was normal-small. Like kit, Clem and her twin brother, Jorge, had been born too early. But unlike kit, the only fallout for them was that Clem had super bad allergies and Jorge had had to wear glasses since the age of two. Small-ish and small were two different things. That was the day kit had bought her favorite hoodie, the black one with the small rainbow star on the front and the bigger rainbow star on the back. The color was as faded as kit’s mom’s tattoo. It had cost $5, which was the exact amount their moms gave them each to spend. “That looks . . . comfortable,” Clem observed, but she meant, “That looks old.”

Kit didn’t care that Clem didn’t like it. It was big and soft and as soon as she saw it, it looked like it belonged to her. It was already familiar. The fact that it was way too big only meant she wouldn’t grow out of it anytime soon. Clem had spent her $5 on a small glass turtle. “It’s not a very turtle-y turtle,” she said. “Don’t be such a turtle!” she told it.

A lot of what Clem said didn’t make sense, but it was funny anyway or maybe it was just funny because it didn’t make sense. They had both laughed so hard that they had to sit down, right there on the pavement, the crowd parting around them. Clem clutched the non- turtle-y turtle, tears running down their cheeks, while Jorge looked dreamily off into the distance, not quite paying attention to what was so funny. Jorge was like that. There, but not always entirely there.

“He has a rich inner life,” Clem said, which made kit picture a whole miniature world existing inside Jorge. “But his outer life needs work.” Then she laughed.

Clem was someone who was almost always laughing, at least back then. At first, kit had been friends with Jorge because she was friends with Jackson and Jackson was friends with Jorge. It had been the three of them. Clem had bugged her, with her always-laughing thing. But after not very long, kit started to find the same things funny that Clem did, and soon kit and Clem were the closest friends. Their friendship grew to be the biggest and the best. So even when Jackson and Jorge were busy—Jackson with his sports and Jorge with his “rich inner life”—Clem and kit were either together or talking on the phone.

Clem was the most important person in kit’s life, other than her mom.

And Clem got it. She understood what kit’s mom was like. She knew what kit’s life was like and that kit had to look out for her mom because her mom had issues.

Kit’s mom’s main issue was that she was afraid. She was scared of cancer and bad guys and fire. She was terrified of traffic and heights and crowds. She was afraid of spiders and germs and blood. The list was pretty long and always growing.

“K.i.t., keep it together,” kit would say, and her mom would put on her brave smile and hold up her wrist so that kit could see she was trying. Sometimes, kit and her mom would go in the bath- room and perform magic over the tub or sink so the oils and “potions” didn’t spill anywhere that couldn’t be easily cleaned up. They had a whole glass shelf of bottles and jars, labeled with things like bravery and truth or rosemary and sage. Kit’s mom owned a hair salon. She was a hairdresser, not a witch, but kit thought her only employee (and her best friend), Samara, might be both. If you didn’t know Samara, you’d think she was just a nice, funny person— she loved riddles—but once you got to know her, you’d find out that she also believed in magic the same way kit did. She believed in spells, believed they could give them courage or love or money or luck, believed in the possibility that herbs and oils and words could really and truly fix any problem.

Mostly it seemed to be luck that kit’s mom was conjuring, but kit thought she should specify whether she wanted good luck or bad. Everything was either one or the other, if you thought about it.

“You’re as small as a detail and the details tell the story. You are the best story of all,” kit’s mom liked to say. “I’m not a story!” kit used to always say back, but now that everything had happened, she wasn’t sure this was true anymore.

After all, everybody has a story, even if the story doesn’t feel like a story when you are the one who is living it.

It’s only afterward, in the telling, that it becomes the thing it was meant to be all along. 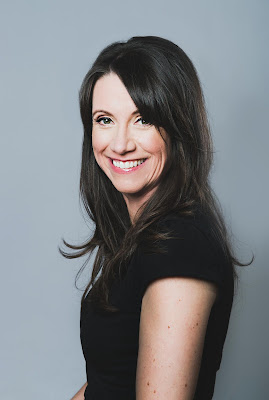 Karen Rivers is too thrown by the "Date of Death" drop down that has appeared below her name in the editing section of this page to actually write anything about her life. When she recovers, this box will be filled with imperative biographical information and may include SECRETS and probably also a few LIES. Now she is going to sit back and anxiously track that "Date of Death" box in case a date suddenly appears, foretelling her imminent doom.

Thanks to Brittani Hilles at Algonquin Young Readers for this opportunity!