Happy Sunday everyone!  Today I'm sharing my thoughts on the Code Black series by V.E. Ulett.  Book one is titled Golden Dragon and book two is named White Elephant.  Thank you very much to Ryder Author Resources for providing me with an ecopy in exchange for my honest reviews.  Read on to see my thoughts: 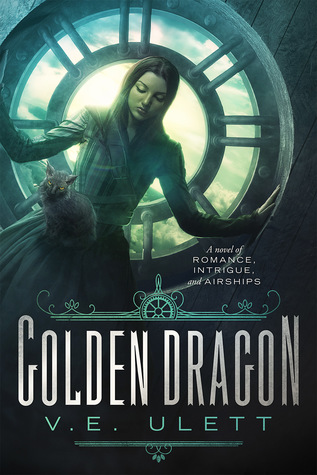 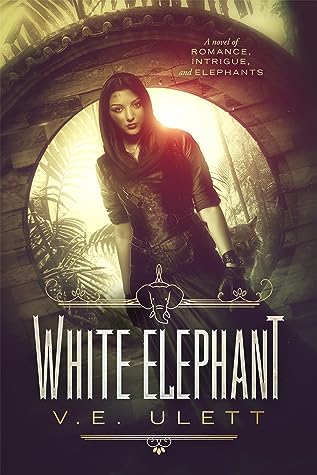 
Miriam Kodio Blackwell is caught between East and West. When a Code Black arises she is recruited by Lord Q, head of British intelligence and airships, who helps Miriam escape Iran only to press her into service of the Crown. Will Miriam survive when she's put aboard the airship Nonesuch—with her captain, crew, and a Hell-Cat of fearsome reputation—and the assignment to rescue the niece of a Dutch ally taken captive in the South China Sea? [Golden Dragon summary]

To keep her place aboard the airship Nonesuch, Miriam must complete another mission for Lord Q — persuade the first white rajah of Sarawak back to loyalty to the British Crown. When Nonesuch crash lands on the coast of Borneo, the mission changes to one of survival. In order to rescue her beloved Captain Maximus Thorpe and the crew of Nonesuch, Miriam must trek through the jungle guided by a team of traveling elephants to the would-be empire-builder's capital. But the jungle has its own laws, wisdom, and lessons, and Miriam may not emerge with her mission and loyalties unchanged. [White Elephant summary]

I'm so glad I decided to give the Code Black series by V.E. Ulett a chance because it was absolutely delightfully charming.  Both books could be read as standalones as they are quite self contained, but I have a feeling that your reading experience will benefit from reading them in order as a series.  I enjoyed getting to know Miriam, Lord Q, Captain Thorpe, and all the rest of the crew of the airship the Nonesuch.  They make quite a team and it was a lot of fun to follow their adventures.

I have to admit that I couldn't resist the author's sense adventure of historical fantasy steampunk.  The witty intrigue, spies, travelling to far flung locales, danger, and a dash of romance make for a compelling combination.  The world-building is pretty fascinating, but the focus is primarily on the cast of characters, all of which are well developed even those in secondary roles.  In the book two we get to learn a little more about what makes everyone tick and discover a little more about their backgrounds.

My only issues with these novels overall are that I could have done without the minor romance element.  I would have been just as happy if this were all sweeping adventures through the skies, to be honest.  There are also a few moments where scenes were somewhat under polished in comparison to other chapters, just enough to take me out the story for a second.  Overall, though, I highly recommend Golden Dragon and White Elephant of the Code Black series by V.E. Ulett.  They're fairly short reads, and they go very quickly and they are a whole lot of fun.  I have a feeling you'll want to try these novels if you're a fan Gail Carriger, Sherry Thomas, The Mummy (1999), and The Mummy Returns (2001).  I'm going to have to try more of V.E. Ulett's work in the future - and her completed Blackwell's Adventure series looks quite promising.

Thanks again to Ryder Author Resources for this opportunity!  My thoughts can also be found on Goodreads - Golden Dragon and White Elephant.