Thomas Wildus and the Wizard of Sumeria (The Elandrian Chronicles #2) by J. M. Bergen (ARC) - Review 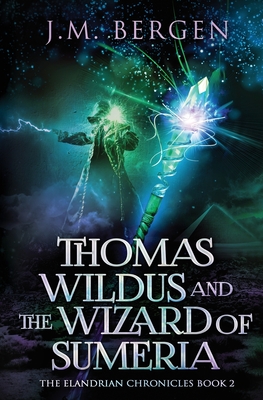 I received an ARC from Book Publicity Services in exchange for an honest review.

Three months have passed since Thomas and Enrique faced off against Arius Strong and prevented an all-out apocalypse. Three long, glorious, summer months – months filled with friends, family, magic, and Thomas’s first real kiss. Unfortunately, the good times are coming to a rapid end. With a cryptic message from a mysterious hacker, Thomas discovers that his nemesis is pursuing an object even more powerful than the crystals. Arius will stop at nothing to find the treasure and destroy his enemies, and this time he’s not alone. Dark creatures with darker powers are flocking to Arius’s cause: shapeshifters, warlocks, even a sadistic killer in a schoolgirl outfit. The forces of good are gathering as well, but with so much darkness at Arius’s disposal, the prospects for Thomas and his friends look increasingly grim. Will time run out before he sees through the lies and uncovers the next level of his destiny?

Thomas Wildus and the Wizard of Sumeria (The Elandrian Chronicles #2) by J.M. Bergen is a more than worthy sequel to the middle grade fantasy Thomas Wildus and the Book of Sorrows. This novel is quite addicting and it's easy to speed through it because I didn't want to put it down. The characters have grown since the first installment and they've become a little better equipped to face the new challenges they find themselves facing. Thomas himself seems better able to adapt to his surroundings in comparison to the past. I also enjoyed seeing a bit more of the magical side of their world, and on that note I'm glad they we're getting a little more detail on the mystery surrounding the disappearance of Thomas's father.

Overall, Thomas Wildus and the Wizard of Sumeria is a fun, action-packed, and magical follow sequel that's perfect for middle grade readers. If you're a fan of Percy Jackson and Harry Potter, you may also want to meet Thomas Wildus. I can't wait to see where The Elandrian Chronicles goes next. Thanks again to Book Publicity Services for this opportunity!


Thomas Wildus and the Wizard of Sumeria (The Elandrian Chronicles #2) by J.M. Bergen will be released on May 20, 2020 and my review is also on Goodreads.