The Case of the Notorious Roboticist by David Hearne - Review 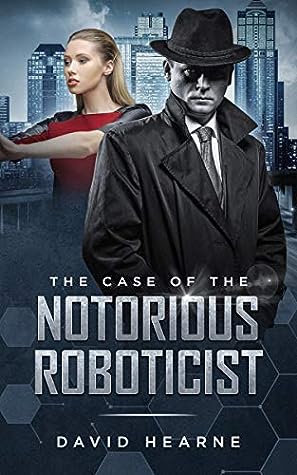 Based on the international award-winning screenplay and set in a future where matriarchy has toppled patriarchy, Moroz is a flawed, old-fashioned gumshoe fighting for equality in a society where human-form androids have become the norm. Notorious roboticist and artificial intelligence whiz Isadora is his greatest adversary yet his only hope is to restore justice between the sexes. Yet her own plans are to keep men under her thumb. When Isadora is charged with murder, Moroz must consider the cost of trying to solve the case: something that could cost him is family, any chance of true equality and his very life. Additionally, footage of Isadora committing the crime makes the task seem like a fool’s errand. In a world where the lines between human and robot love are blurred, Moroz must also find a way to stop a pending contract that threatens to enable a new rise of the robots, one where their bias seeks to erode men’s rights further and put them on the road to extinction.

The Case of the Notorious Roboticist by David Hearne sounded like it would have been exactly my cup of tea. The concept behind it is brilliant and there is so much potential, but it never quite worked for me or lived up to my expectations. I must admit that I’m total sucker for anything noir or noir adjacent and if there are elements of science fiction or cyberpunk involved that’s all the better in my opinion. Since this short novel includes all of those, I absolutely expected that this would be a total shoo-in for me, but like I said it just never quite worked for me as well as I would have liked.

My favorite aspect of The Case of the Notorious Roboticist is its world-building. The novel is a short and quite fast-paced read, but we do get a decent amount of world-building. That said, though, the world-building fairly spare. We get what we need to know before moving on, but I wish we got to see a little more when it comes to experiencing a wider-angle view of the world Moroz and company inhabit. The world-building could be described as much more functional rather than anything else. That also makes it a bit of a weak link in my eyes. With this story, I didn’t feel like I could walk into world these characters inhabit. Regarding the characters, our lead Moroz is the figure I had my eye on. He’s the private eye of the story and I could appreciate his determination. Overall, though, I wasn’t very invested in anyone we met in the story. The way the story is told, there’s an extra buffer between the reader, the cast of characters, and their world. I didn’t feel like I was meeting the characters or visiting their world but seeing it all through a small window from behind a glass wall.

According to the description of this novel, the author actually adapted this novel from his own award-winning screenplay. Even though the novel format didn’t really work for me, I’d still like to see a filmed version of the story or perhaps even the screenplay itself. Honestly, I think that a good deal of my issues with David Hearne’s The Case of the Notorious Roboticist is one of format. The missing links may easily be filled in with the noirish cyberpunk visuals and actually seeing actors breathe life into Hearne’s characters. Overall, if you’re interested in noir, cyberpunk, or AI, you may want to try this novel because it does have a lot of potential to be built up into something great. Perhaps one day, we’ll have the opportunity to see it on the big screen.


My review is also on Reedsy Discovery and Goodreads.