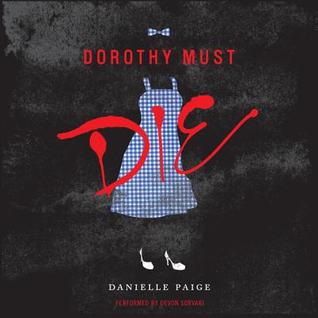 Amy Gumm's life is turned upside down when a tornado picks up her family's trailer and deposits her in Oz. Yes, that Oz - the one with the yellow brick road, the munchkins, the witches, and the flying monkeys. Except this Oz isn't like the Oz she remembers from the books and movies, this one looks like it's been drained. Here the Good Witches can't be trusted, the Wicked Witches might be the good guys, winged monkeys can be executed for acts of rebellion, and the yellow brick road is crumbling. Dorothy is what happened to this Oz. Somehow she found her way back, seized control, and the power went to her head - now no one is safe. Amy is quickly recruited by the Revolutionary Order of the Wicked and is trained to fight. She might be the only one who can put an end to Dorothy's reign of terror once and for all.

For the most part, I liked Danielle Paige's dystopian take on Oz. The best part of the story is easily the premise and the setting. Oz is now so twisted, dark, and creepy - I was never quite sure what to expect from it. The change from a Technicolor wonderland to a dystopian wasteland is well realized and developed. Paige really gets across just how different her take on the place is right from the get go. I also enjoyed some little details and Easter eggs that make brief appearances in her novel.

However, as much as I liked those aspects, I had issues with other parts. I never really clicked with Amy. I'm not quite sure why, but her character consistently rubbed me the wrong way, especially as she begins to develop a conscience when an opportunity to get rid of Dorothy presents itself after weeks and weeks of training. On that note, the training slowed everything down dramatically. The middle of the story dragged on and on and on and doesn't really pick up until the last few pages of the book. There's also a bit of romance that goes absolutely nowhere between Amy and Nox. It doesn't do the story any favors and would have benefited from being entirely removed as it just slows it down even more.

Like I mentioned before, the story really doesn't take off again until the last few pages. The ending is entirely open and nothing really gets resolved. You know the tagline on the back of the book: "Your Mission: Remove The Tin Woodman's Heart. Steal The Scarecrow's Brain. Take The Lion's Courage. And Then - Dorothy Must Die. Only You Can Make Oz A Free Land Again." Yeah, it doesn't actually come into play until the very end - a bit deceiving, really. It relies on you reading the next book in the series. Obviously going in, I knew there was a sequel, The Wicked Will Rise, and that there was a third book coming called Yellow Brick War, plus all of the novellas, but I was really hoping that I could say "Ding dong everybody!" by the time I got to the end of the book.

Overall, I liked the concept and setting of Paige's debut, but I had too many issues with Dorothy Must Die to love it. I haven't decided yet if I want to continue on with the sequel. You may like this twisted take on Oz if you enjoyed Splintered by A.G. Howard, Regina, the Evil Queen, from Once Upon a Time, or "How The Wizard of Oz Should Have Ended".