One for the Money (Stephanie Plum #1) by Janet Evanovich - Review 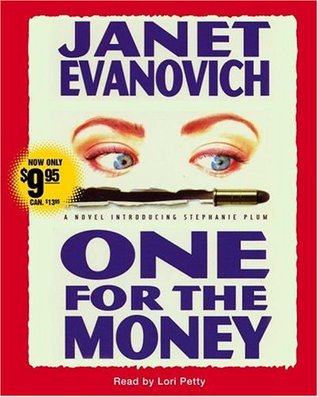 Stephanie Plum needs money fast. Times are tough and she decides to turn to her cousin, Vinnie's bail bond company. She has no experience, equipment, training, or skills whatsoever, but that doesn't seem to matter as she's willing to take on anything that will line her pockets with some much needed cash. She takes on high stakes bail jumper Joe Morelli, a vice cop wanted for murder. Morelli is also her ex and she knows he means trouble.

I've heard so much about this series over the years, and quite a bit about it recently, especially the sense of humor. Finally, I decided to try the first novel out in audiobook form. I didn't really know what to expect from it, but I liked it more than I expected to and had some fun listening. Lori Petty did a fine job of bringing Evanovich's cast to life. Part of what makes the story funny is Stephanie's dumb luck that somehow helps pull her through some questionable and bad decisions. Seriously, some of the decisions she makes in this book make absolutely no sense to me. The first key questionable decision being: How does an out of work cheap lingerie buyer decide to become a bail bonds agent? Aside from needing money and having a family connection to that line of work, she has nothing going for herself that gives any impression that she is cut out for that work in any way. She's not dumb, but she is not at all clever. Whatever the case may be, she still manages to do decently at it and scrape by mainly by sheer dumb luck and watching her navigate this new landscape was pretty entertaining.

I'll probably be continuing this series in the future, but I'm not really in any hurry. Is it just me or does any one else think of Emma Swan from Once Upon A Time when they think of Stephanie Plum. They look nothing alike based on how Stephanie describes herself. Maybe it's that they're both bail bond agents...