Thor, Vol. 1: The Goddess of Thunder by Jason Aaron, Illustrated by Russell Dauterman and Jorge Molina 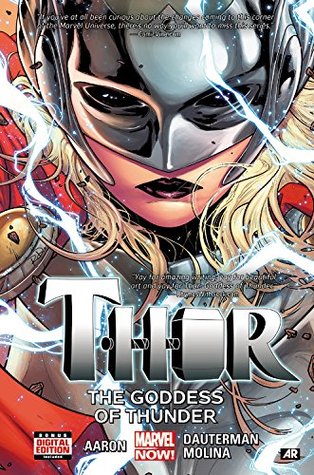 Thor is unworthy to lift Mjolnir, which lies on the moon, and as the Frost Giants invade Earth a new hand will be worthy. A mysterious woman has now taken up the mantle of Thor, and she may be the planet's only hope against the Frost Giants. Her identity is even a mystery to Odin, who is desperate to see it returned and calls on some dangerous people to make sure it gets back. Of course, the Odinsson doesn't like the idea of someone else being worthy of Mjolnir. Who is the Goddess of Thunder?

I've heard quite a bit about this over the last few months and decided to check it out for myself. Now, I don't know very much about Thor, unless you count the Marvel Cinematic Universe's take on the character and Norse mythology. Either way, this had garnered enough buzz to make me try it and I'm sure glad I did. The art and writing are pretty stunning. I liked seeing how her thoughts are stylized versus her new style of speech. My favorite part has to be the fact that the new wielder of Mjolnir is not apologetic at all for her new role, she simply does the job as if she was born to it. Now, I've already been spoiled as to who she is, but I'm looking forward to seeing it play out as I continue the series.


I read this graphic novel on December 18, 2015 and my review is also on Goodreads.