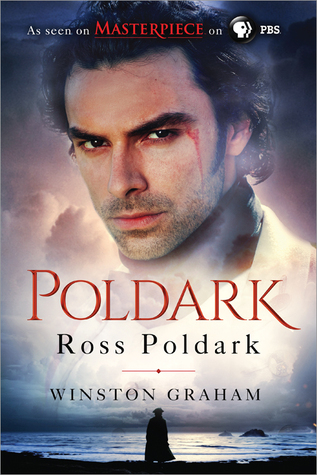 Ross Poldark has just returned to his home in England from the American Revolution, eager to be reunited with his love, Elizabeth. He quickly discovers that his father has died, the family mine has ceased operation, his home has been overrun by livestock and their old drunken servants, and, worst of all, Elizabeth has gotten engaged to his cousin, Francis. Ross will have to begin his life anew.

The main reason I wanted to begin Winston Graham's Poldark Saga was because I really enjoyed watching the 2015 adaptation of the first two books in the series starring Aidan Turner as titular character. Almost as soon as I began watching I put my name on the hold list at my local library for the first book. I didn't get my hands on a copy for about four months, but I was glad I waited for it. This historical fiction novel is incredibly engaging. Graham does a brilliant job of describing Poldark's beautiful Cornwall. It's also easy to get hooked on his well-defined characters and root for them, or boo them (in Francis's case). While Ross is a classic character, Demelza is my favorite and she easily steals any scene she's in. It turns out, though, that she starts off quite a bit younger than I expected when Ross and Demelza first meet in the novel - instead of being upper teens or twenty, she is thirteen but resembles an eleven year old.

If you're interested in fascinating historical fiction with intriguing characters and a little romance, you may want to try this book series, or even the brilliant television adaptation. I will definitely be moving on to the sequel, Demelza.