Thor, Vol. 2: Who Holds the Hammer? by Jason Aaron - Review 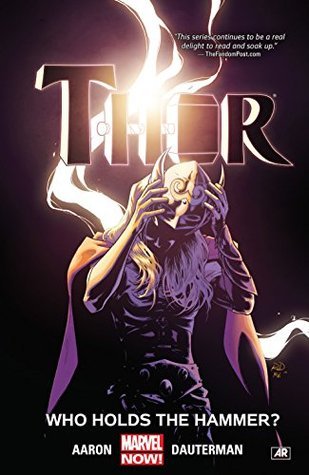 Volume 2 continues the story of the new Thor in issues six through eight. Odin continues to use his brother to determine her identity. There are quite a few good cameos, even Coulson briefly appears. The Odinson tries to work through his list of candidates, only to realize he has been unsuccessful in determining the identity of the new Thor. By the end of the final issue, he still doesn't know her true identity, but the reader does. I had already been spoiled, but it was definitely interesting to see it play out. I'm looking forward to seeing more of the new Thor.

This volume also includes the Annual #1 which includes three shorts featuring King Thor (distant future), Thor (current goddess), and Young Thor (distant past). Current Thor has the most interesting segment as she interacts with the Warriors Three. It's also written by Nimona's Noelle Stevenson. I was also pleased to see that Young Thor's artist was Chew's Rob Guillory. It also includes a "What If" issue from 1978 regarding an alternate universe where Jane Foster found Thor's hammer rather than Donald Blake and names herself Thordis.