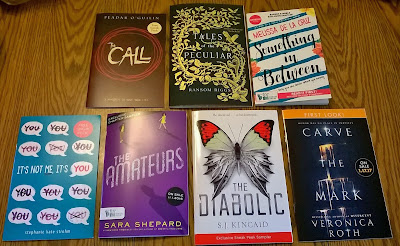 Beginning this weekend, I am hosting an international giveaway of ARC samplers!  What could be better than a giveaway to hype yourself up for some awesome upcoming releases!

One lucky winner will receive all of the samplers pictured above:

The Call by Peadar Ó Guilín (August 30, 2016) - I hadn't heard of this until I picked up the ten page sampler. I am entirely intrigued by this new and vicious look at the Sidhe.  I'm sold and I can't wait until this book's release!

Tales of the Peculiar by Ransom Riggs (September 3, 2016) - As a fan of Miss Peregrine's Peculiar Children, I am very excited to see these peculiar fairy tales. This sampler includes the gruesome story of "The Splendid Cannibals" which is quite Brothers Grimm-esque and features a twisted happily ever after! I can't wait to read the final copy!

Something in Between by Melissa de la Cruz (September 27, 2016) - I wasn't all that interested when I first saw this contemporary, but after reading the short summary I was immediately sold on talking home this eight chapter sampler. It's a diverse coming-of-age novel featuring the timely subject illegal immigration and the American Dream. Based on these ninety-one pages, I'm going to say it's not to be missed.

It's Not Me, It's You by Stephanie Kate Strohm (October 25, 2016) - After seeing this float around the blogosphere recently, I'm definitely interested in it.  Based on what's included in these nineteen pages, it looks like it will be a hilarious contemporary told in an interview/ presentation format. By the way, the girl giving the presentation, Avery Dennis, is the most popular girl in school and the head of the prom committee - and she's just been dumped by her boyfriend, the most recent in a long string of them.

The Amateurs (The Amateurs #1) by Sara Shepard (November 1, 2016) - This series opener Sara Shepard mystery could be right up my alley. It's about a couple of young, amateur detectives who plan on investigating a five year cold case mystery via their favorite website, Case Not Closed. However, the sister of the victim seems completely uninterested in helping with their investigation. The Amateurs sounds like it has plenty of potential.

The Diabolic by S.J. Kincaid (November 1, 2016) - Just based on the first three chapters included in this sampler, I really expect this to take off and be the next big thing. It's already been called Red Queen meets The Hunger Games, but I don't think either comparison is all that accurate. Either way, it's a sci-fi novel about a Diabolic, a dangerous human-like weapon, that will kill to protect the person they were built to protect. Now, this Diabolic, Nemesis, has to become her human owner, Sidonia, the heir to the galactic Senate, in order to best protect her from two-faced politicians and their conniving children. I fully expect this to be an excellent combination of butt-kicking action and political intrigue.

Carve the Mark (Untitled Duology #1) by Veronica Roth (January 17, 2017) - I'm super excited to get my hands on Veronica Roth's first novel in a brand new duology when it's released. It only includes chapter seven and I really wish there was more to this first look! I'm looking forward to learning more about the Shotet and Thuve peoples, the violence and vengeance filed planet they call home, and their unique currentgifts.

Now to get to what you're hear for, the giveaway!

This giveaway begins today and ends at midnight on Sunday, June 26th.  The lucky winner will be notified via email and have 48 hours to respond with their mailing address to claim their prize.

May the odds be ever in your favor!