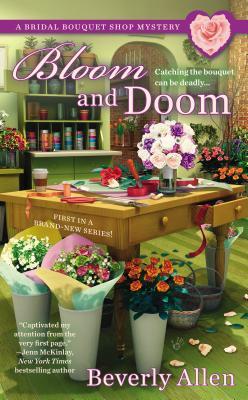 Audrey is co-owner and florist of the Rose In Bloom in the small-town of Ramble, Virginia. She specializes in bridal bouquets where she is able to put her knowledge of Victorian flower meanings to work. None of the couples she has worked with have split up, that is until the groom of her current client turns up dead, and the bride is the prime suspect.

Jenny, the bride-to-be, was one of Audrey's closest friends when they were growing up until Jenny kicked her to the curb for different set of friends, but Jenny and her mother come to Audrey to design the floral arrangements for the wedding. Audrey's of the opinion that the flowers they want in the bouquet wouldn't make a good combination in regards to flower meanings, but nevertheless she agrees to work with them. Jenny's groom-to-be is Derek Rawling, Ramble's rich playboy (think George Clooney circa O Brother, Where Art Thou) and it's very strange for Audrey to consider that her friend somehow reeled in a guy like him. Unfortunately, Derek dies a horrible bloody death before they can walk down the aisle. He's found in his sportscar which is parked outside of Jenny's apartment along with a shredded bouquet and a floral knife sticking out of his neck. Obviously, things don't look good for Jenny as it's right outside her apartment, she had just broken up with Derek, and she just started taking floral arrangement lessons from Audrey who had given her the floral knife and other tools to practice at home. Things really don't look good for Jenny, but is she guilty or is there something else going on? If you guessed "something else," you would most definitely be right. This is not in the least an open and shut case.

Now, Bloom and Doom isn't my go-to choice when it comes to mystery books. Usually, I prefer mine to be gritty, hard-boiled, and noir-ish. A caper mystery can also be fun, if done the right way. I also love reading a good urban fantasy novel like The Dresden Files series by Jim Butcher. I tend not to read all that many cozy mysteries as they're not really my thing. The main reason I'm reading this is that it's the selection for a book club. I did enjoy this read, but I doubt I'll be rereading it or returning for the rest of the series.

The main thing that makes Bloom and Doom work for me is Audrey's voice. Since it's in first person narrative, the narrator's voice can make or break the story and in this case she made it. I'm glad she has a good sense of humor and her thought process can be entertaining, for the most part. The story is chock full of various references and some of them worked surprisingly well (did you catch The Hunger Games one on page 245?). I'm glad her character is pretty open-minded and that she doesn't go looking for trouble, even if that doesn't work out so well.

For the most part, Audrey seems like a real person because she's well-rounded and relatable - kind of our florist every-girl, isn't she. She's not over the top, but she makes sure to bring her cleverness to the table. For the most part, the same goes for Liv, Audrey's cousin, although, we don't get as good of a sense of her character in comparison to Audrey. The one character that just plain bored me is Amber Lee. I mean, she's nice enough but I just didn't care all that much about her, aside from the fact that she dispenses important information (aka gossip) from time to time. As for Nick, Audrey's potential love interest, he just seems like quite a nice guy. Who doesn't like cupcakes and other delicious baked goods? The two seem like they could make a good pair. However, there is an aspect of their "relationship" that gets old fast - keep in mind it only happens twice - is the part where he catches her when she trips and/or falls. Only having that in the story once, or even better zero times, would have been much more acceptable. Same goes for some of the embarrassing things that happen to Audrey over the course of the story (see: Little Joe's dancing on pages 184-186). As it is, sometimes I just don't know how much harder I could have rolled my eyes...

On to the mystery itself, it's good and I like the fact that it is anything but straightforward. I appreciated the fact that the clues are slowly doled out. The build-up and pacing of the mystery are both good, especially when it comes down to the wire. As to the big reveal, I had the villain pegged from the time they first popped up and from there it was just taking the information given to us to see if it fit. At some points, things are a just a tad obvious. I wasn't off by much at all! (view spoiler)

Overall, I enjoyed this cozy mystery much more than I initially expected to enjoy it and that mostly goes back to Audrey's strengths as a character. If you're relatively new to this genre, or subgenre, this would be a good place to jump into it, especially if you like flowers and a clever leading lady.