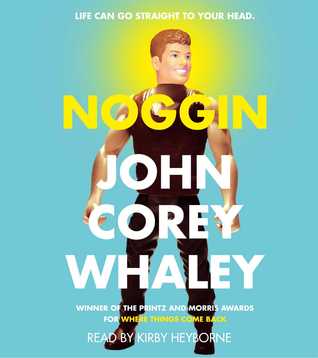 In the past, Travis had terminal cancer and near the end he signed up for an experimental cryogenic procedure. Basically, his head would be frozen and in 50+ years he would be resuscitated on a healthy, cancer-free donor body. However, the technology catches up much faster than initially expected and he is reawakened only five years later as the second successful case. Enough time for his family, friends, and girlfriend to begin to recover from losing him and move on. For Travis, though, it feels like almost no time has passed from when he left to when he came back. He should be 21, but for all intents and purposes he's still only 16 and it seems like everyone and everything has changed except him.

John Corey Whaley has an incredibly unique voice as he tells this heartfelt story. I was kind of nervous about reading it because it seems to me just going off the premise that could either be amazing or it could crash and burn. Luckily for me, it's actually a pretty darn amazing tale, for the fact that Whaley was able to pull it off and the fact that it was easy for me to relate to the characters. At heart, it's very much a contemporary novel with a sci-fi element thrown in. Even if you aren't generally a fan of sci-fi, you should try Noggin because it's not in the least an overwhelming aspect. Throughout it's played down and put on the back burner, the story is much more focused on the after effects of the procedure on Travis, his friends, and his family.

At times this story can be realistic, dramatic, humorous, hopeful, and heartbreaking. For me the top three heartbreaking scenes in order of occurrence are the return to the arcade, the truth about his parents' relationship, and the graveside service. I also enjoyed the hope to be found at the end of this story. My only complaint about it is that it becomes a little too repetitive on Travis's past and possible future relationship with Cate. I understand what the author is going for but at times it felt a little much. There were a few other topics I would have liked to have seen addressed that were just barely touched upon.

Overall, Noggin is a great read that asks you to consider some difficult and very real questions about time and life. If you enjoy John Green's The Fault In Our Stars and David Levithan's Every Day, as well as Mary Shelley's Frankenstein, this may be exactly what you're looking for!