Sword of the Rightful King by Jane Yolen - Review 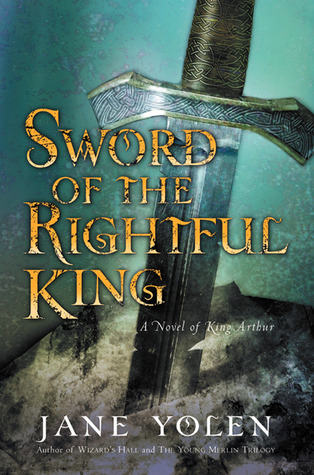 Arthur, at 22, has only been on the throne of Cadbury (not Camelot, for some reason) for four years, but his kingship is anything but secure. Morgause, mother of trusted knight Gawaine, is an evil witch and is scheming to get rid of Arthur and put her son on the throne. Merlinnus, Arthur's trusted mage, devises a plan, with the help of a mysterious new assistant named Gawen, to ensure Arthur's position as the once and future king.

Since Arthur is portrayed as a young man in this version of the myth, I couldn't help but imagine Bradley James as Arthur and Colin Morgan's Old Merlin as Merlinnus (why the added "nus"?). I also pictured the Infirmarer/ Court physician as Richard Wilson's Gaius. Seriously, if you haven't watched Merlin, you're missing out!

I believe I would have given Jane Yolen's Sword of the Rightful King five full stars if it weren't for that rushed ending, if the rest of the knights aside from Gawaine had more than cameos, and if Morgause had a little more depth of character. Otherwise, though, this is a pretty good reworking of Arthurian legend.